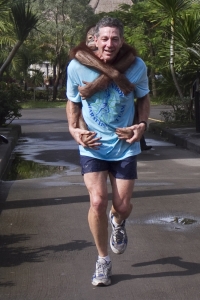 He broke the record while visiting Bali and to celebrate, he skipped 50-yards with an orangutan’s on his back! Here’s a short excerpt from a post on Ashrita’s blog that is written from the orangutan’s perspective!

Okay, I’m as open minded as the next orangutan but, if you ask me, the human currently skipping around the Safari Park is a few bananas short of a bunch – if you know what I mean. Let’s face it, humans walk weird enough as it is – using only two legs instead of on going all fours. But on top of that, this maniac is doing some awkward movement that my trainer calls “skipping”. For God’s sake, it’s 85 degrees outside and the humidity is off the charts.

Uh oh, the skipping guy (I nicknamed him “Skippy”) seems to have finished and is looking in my direction. Rian is carrying me over to the nut and…wait! What’s going on?! Rian is putting me on Skippy’s back. This is embarrassing! It’s a good thing that the other orangs aren’t here to see this. As it is, Theresa, the elephant who is on the course, is going to have a field day with this with the other pachyderms. I’ll see if I can bribe her with some bananas to keep quiet.

All right, I guess it wasn’t as bad as I feared. Skippy only skipped with me for a few minutes and then Rian retrieved me. After the group photo, I heard Skippy telling a reporter that he skipped for 5 kilometers or 3.1 miles in just under 30 minutes, and that he was breaking some kind of Guinness record. He said he loves to skip because it’s such good exercise and so joyful. Well, good for him. I guess you can’t always judge a mango by its skin.