Alright y’all… Several people have asked me what the Game On Diet  that I used to play my way to being 40 lbs lighter than I was 9 months ago is all about, so I figured a blog post was in order.

When a friend sent a group email about the game to me in June last year, it sounded intriguing but I didn’t think much of it until that still small voice within spoke up about a week later and said,

“Maybe you should give that Game On thing a try!?”

I am so glad that I listened to that voice and not the more reluctant part that thought it would be too hard or that it wouldn’t work for me!

Clearly all programs like this are not for everyone, but for me personally this game has been like a golden ticket as far as a FUN and EASY way of experiencing a body, mind, and spirit connection and losing a boatload of weight in the process! Needless to say I’m a huge fan and even started administering my own Game On group about six months ago.

The Game On Diet (as I played) is an online team sport.  Each player puts in $25 toward the prize and is responsible for keeping track of the number of points they earn each day for a variety of healthy activities (see below).

Everyone turns their scores in at the end of each week and as then the administrator  calculates overall team averages and keeps track of them throughout the course of the game. The highest scoring team wins the prize money in the end (as does the highest scoring individual not on the winning team)!   The cool thing is that everyone else wins too because they dared to take on a 4-week challenge to make their health more of a priority in their lives…and the benefits of that are undeniable!

If you are interested in playing y order a copy of the Game On! Diet at your earliest convenience! Then find a fun friend or two to play with you or check out this Game On group that starts new games on a fairly regular basis.

You also can also check out the FAQ on the Game On! Diet website for more info.

You have a potential of earning 100 points per day. You count your points for the following, which will be added up and divided by # teammates each week:

Pick a new GOOD HABIT to do every day for the month = 10 points per day. You must pick something very specific and do-able like 3 sun salutations in the morning (vs. saying do yoga once a day). Habits run the gamut as far as what players pick!

Pick a BAD HABIT to stop for the month = 10 points per day if you don’t do it each day.

COMMUNICATE with at least one member of your own team and one member of the opposing team. = 5 points.  Each game has a Google Group that sends emails to all players so this is relatively easy to do !

EAT five healthy meals a day = 6 points each for a total of 30 points – Meals must be spaced 2 to 4 hours apart, and include a lean protein the size of your palm; a healthy carb the size of your fist 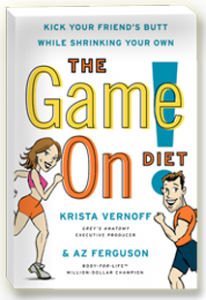 (fruit/veggies/whole grains); a healthy fat the size of your thumb; and you must have veggies with at least two of your meals each day.

There also is a list of FLABB foods in the book that are not allowed w/ out penalty. This list includes artificial sweeteners; fried food; sugars; butter; cream; fruit juice; most desserts; sodas; and processed meats.  However, you are allowed 100 free calories a day that can be anything (besides alcohol and soda).  Also, cucumbers, jicama,  and/or celery snacks between meals are OK but if you eat anything else between your 5-allowed meals it will cost you a 10 point snacking penalty.

You are allowed one meal off per week where you can eat whatever you want and one day off from all of the rules.   Alcohol is only allowed on the meal off (one portion) or the day off (unlimited but not to excess!) Otherwise you pay a 25 point penalty per drink!

BONUS POINTS:
1) Meeting a 1% weight loss goal each week = a 20% bonus
2) Submit your score sheet to the scorekeeper by Mon at noon = 10 point bonus

Obviously, integrity is the name of the game here! It’s the HONOR SYSTEM – so it is important to be true & honest for yourself and your teammates! After all if you cheat, you really only cheat yourself.  Each player is giving an excel spreadsheet to make keeping track of their points easy.

And that’s it!   While the idea of it being a game might make it seem competitive, it really isn’t about that. It is not always about following the plan perfectly..it is about doing your best and being accountable and forgiven when you aren’t able to follow the rules for whatever reason.

It really is true that every single person who plays ends up winning in the end even if they only do 1/2 of the stuff they are supposed to do in a given week!  Daring to play makes a powerful statement to the Universe about our intention of taking a stand for good health…and I for one believe that only good can ultimately come from that.