I am hitting the road this evening for my 15th Burning Man where I have had all kinds of magical experiences throughout the many years I have been going….So far this year is no exception, thanks to the cosmic circumstances that inspired me to attend in the first place. It has never felt so meant to be!

Six months ago, I got a tweet from an enthusiastic young woman named Michelle Joni who was excited to discover iskip.com because she had recently started her own summer skipping club in NYC.  As she told me her story, I marveled at how similar it was to my own!  At the age of 28, Michelle was almost exactly the same age I was when I started my “skipping club” in San Francisco…and the freshness and zeal she brought to the skipping project helped that part of me reawaken as well. 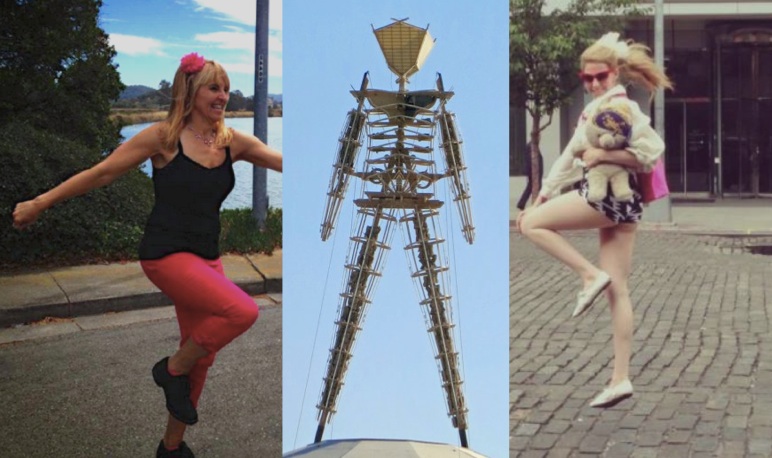 I’d been praying (and expecting) that someone like her would eventually skip on the scene. After all if Bill Martinelli had the same call to skip in the 1980s as I did in the late 90s, it only made sense that there would eventually be someone from the next generation who would feel that same inner tug!

I did an interview with Michelle Joni for iSkip and it didn’t take long before we became fast and furious online friends. I smiled to myself when she told me that a new skipping friend had invited her to attend her first Burning Man this year, knowing that with her creative spirit and flair that it would be a perfect experience for her and that she’d be like a little fish in water out there.

When I checked in with Michelle a few weeks ago to see how her Burning Man prep was coming along, she said her friend’s plans had changed and that she thought she wasn’t going to be going. She said she was going to wait a few days before deciding for sure to see if any magic happened….and that sparked something inside of me!

Even though I wasn’t planning on attending, I had said that if any “playa magic” happened and the Universe made it clear that I was meant to be at Burning Man this year that I would be open to going….and the fact that my skipping soul sister had an extra ticket…and could use the assistance of a Bay Area resident to help her get everything ready since she’s flying in from NYC certainly fit that bill!

So this evening, my beau Sven and I (who are celebrating the 11th anniversary of our meeting each other at Burning Man in 2002) will be meeting Michelle Joni at a hotel in Reno…and tomorrow morning, the three of us will head off into the dusty desert with 60K other creative spirits to build a temporary town called Black Rock City! What an adventure…and an exciting way to meet someone for the first time!

It’s so fun to imagine the positive skipping mischief we will create out there!  I’m so excited I can barely stand it. Burn baby burn!
Share This Post: