In the over 15-years since I created this website, I’ve had been lucky enough to virtually connect with kindred skipping spirits from all over the world, many of whom have made wonderful contributions to the world of skipping.

But I have to say, the skipping Gods really broke the mold when they sent Michelle Joni my way about a year and a half ago.  That is when she sent me a tweet to tell me the about the skipping club she had started in New York City. The more I learned about her story, the more I marveled at how similar it was to my own!  In her late 20s, Michelle was almost exactly the same age I was when I started my “skipping club” in San Francisco in 1999…and the freshness and zeal she brought to the 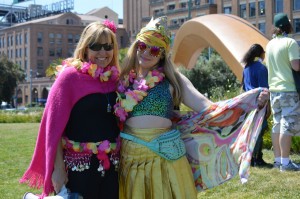 skipping project helped reawaken my passion for skipping as well.

I’d been praying (and expecting) that someone like her would eventually skip on the scene. After all if Bill Martinelli had the same call to skip in the 1980s as I did in the late 90s, it only made sense that there would eventually be someone from the next generation who would feel that same inner tug!

I interviewed Michelle for the Skipping Hall of Fame right away and it didn’t take long before we became fast and furious virtual friends. So much so that when she ended up w/ an extra Burning Man ticket, we decided to attend the annual art festival in the desert together! It was her first and my 15th time, and after going through that experience together I knew we’d be connected for life.

But it wasn’t until Michelle flew out to San Francisco last month to help co-lead the 15th anniversary Skipalong for Hopalong event that I realized just how much of a match made in heaven we really are.  After skipping all around the city and comparing notes about our experiences, we both couldn’t get over how lucky we are to not be alone in our shared mission of being channels for the positive energy of skipping in the world. I imagine, especially if you don’t know Michelle or I personally, that sounds pretty out there…and it is….which is why I am oh so very grateful to have found such a smart, energetic, and fun partner in skipping crime. At last, I am not the only one that the Universe has so clearly called upon to share the joy of skipping with the world in a major way.

Michelle Joni’s Skipping Club is currently in full swing w/ at least one skip a week in the New York area (see schedule below) each week.  They were even written up in the New York Times!  Be sure to check out Michelle Joni’s website…and get thyself to a skip this summer if you are going to be in New York!  You won’t be sorry! 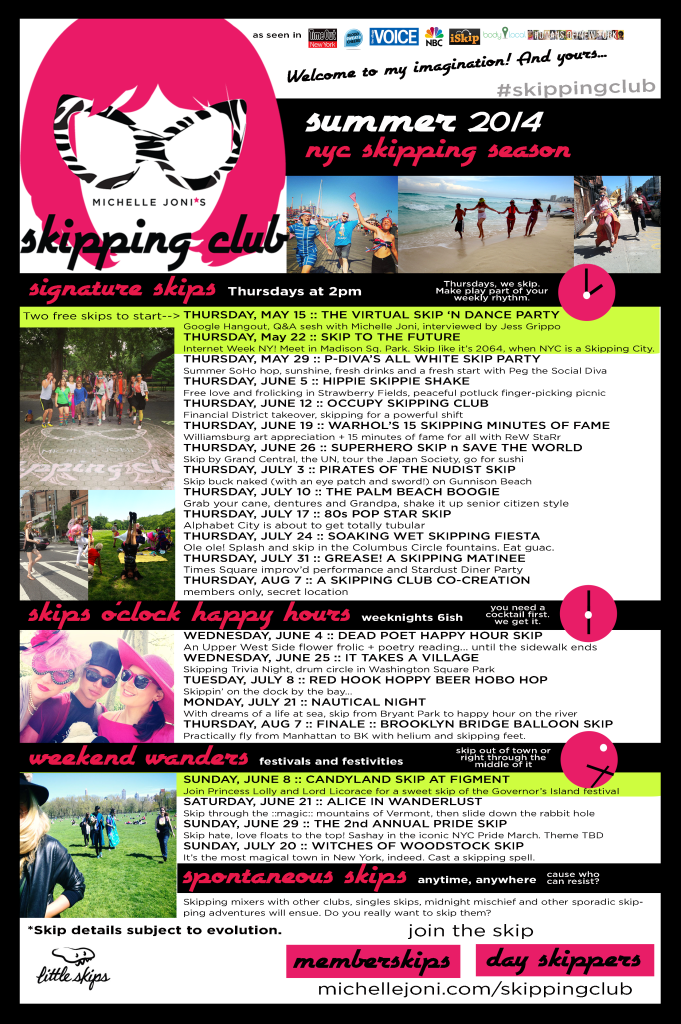 One thought on “Ode to Michelle Joni”