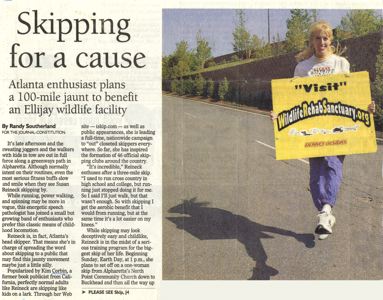 In April of 2001, a skipper in Atlanta, Georgia named Susan Reineck skipped 100-miles across Atlanta to raise awareness and money for a wild life sanctuary where she volunteered. 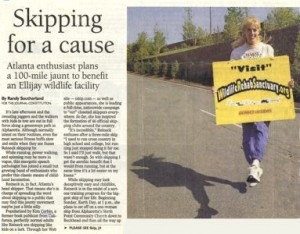 “It’s late afternoon and the sweating joggers and the walkers with kids in tow are out in full force along a greeways path in Alpharetta. Although normally intent on their routines, even the most serious fitness buffs slow and smile when they see Susan Reineck skipping by.

While running, power walking, and spinning may be more in vogue, this energetic speech pathologist has joined a small but growing band of enthusiasts who prefer this classic means of childhood locomotion.

Reineck is, in fact, Atlanta’s head skipper. That means she’s in charge of spreading the wrod about skipping to a public that may find this jaunty movement maybe just a little silly.

“It’s incredible,” Reineck enthuses after a three-mile skip. “I  used to run in high school and college, but running just stopped doing it for me. so I said I’ll just walk, but that wasn’t enough. So with skipping I get the aerobic benefit that I would from running, but at the same time it’s a lot easier on my knees.”

While skipping might look deceptively easy and childlike, Reineck is in the midst of a serious training program for the biggest skip of her life. Beginning Sunday, Earth Day, at 1 pm, she plans to set off on a one-woman skip from Alpharetta’s North Point Community Church down to Buckhead and then all the way up to Ellijay – more than 100 circuitous miles. Her goals for this event she calls, “Bound for the Wild” is to raise money and public awareness for the Wildlife Rehabilitation Sanctuary.

“In Atlanta, people are so uptight,” says Reineck. “They’ve got so much on their minds. They’re always thinking about work, and I just see so many unhappy people. I think this is a good place to get more people skipping.”

While skipping may never be quite as popular as jogging, more and more people are coming to recognize its benefits. She believes that skipping actually does elevate your mood, and she feels, yes, like a kid again. It’s downright hard to be out of sorts when you’re skipping. And the reaction she gets from people on the skipping trail is positive as well.

“The cynic in me says people are going to look at me like I’m nuts or they’re going to cal me a freak,” says Reineck. “Instead people just smile and say hi.”

And secretly wish that they were skipping, too.