Perhaps you were one of the nearly half-million people who watched this YouTube video from the 1980s of enthusiastic skipping pioneer Bill Martinelli skipping around Charlotte, NC while singing the praises of skipping through life. 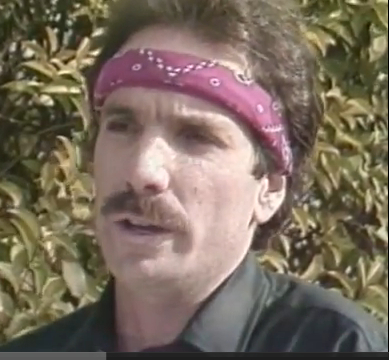 Perhaps like many people who left comments on the video – wondered out of idle curiosity where in the world he is today and if he’s still got a skip in his step. Well, we are happy to report that  THE Skipper has been found  after what ended up being a long and diligent search that lasted well over a decade.

Our quest to find him began way back in 2000 shortly after iskip.com was created. At the time, the “skipping movement” was getting all kind of national publicity – from Time to People to the Associated Press – and several people who read the story sent in emails about a man in Newport, Rhode Island who has been an extraordinarily passionate skipper and had gotten a tremendous amount of national publicity in the 1980s – including the Today Show!

Since for all intents and purposes, the Internet did not exist when he was doing his thing and we weren’t even sure what his name was at the time, online searches came up short. But we were undeterred.

Iskip’s Kim Corbin even visited Newport at one point and asked everyone that she met if they remembered the Newport Skipper from the 80s. One particularly charming African American man convinced her that he had been the one that had skipped around Newport and she bought his story hook line and sinker. That is until she wrote about meeting him in her “As the World Skips” newsletter and some friends of the REAL Newport Skipper wrote to tell her she’d been had since THE Skipper was white!

After a couple of years of searching, Kim finally realized she had to let go of the hope of ever finding the mysterious skipper who was surely a kindred spirit from the 80s and accepted that it wasn’t meant to be.

That is until the the Carolina Camera video went viral recently and resparked her hope and commitment for finding him!  Kim wrote a post on iskip.com asking for anyone who had leads to email her and reached out to a reporter at Slate Magazine who had written a “the rest of the story” article that revealed more about THE Skipper’s story from the 80s. But, he too, had been unable to locate him before writing his piece.

We received emails from two complete strangers who wanted to help Kim find Bill Martinelli. One lived in Rhode Island and sent some names/phone numbers based on her research, and a fellow in Florida, which was the last reported place THE Skipper had lived, sent some contact information for Bill Martinellis in that area as well.

Imagine Kim’s surprise when the man on the end line at the second number she tried ended up being THE Skipper!  When he asked who was calling, she told him that she was the creator of the iskip.com website and that she’d been searching for the Newport Skipper for many moons!  He said that he knew who she was and was even aware that iskip.com existed because friends had told him about it in the past.

Of course, they had lots to talk about and had plenty of skipping notes to compare! It’s pretty miraculous if you think about it that whatever force inspired him to skip as an adult for the first time with his girlfriend on a Rhode Island beach in the 1980s and touched Kim’s heart and spirit in an almost identical way on the streets of San

Francisco in 1997 and inspired her to become a passionate skipping spokesperson as well, even though she had no idea at the time that a predecessor had skipped an almost identical path two decades before!

Kim told THE Skipper that he had already been inducted into iSkip.’s “Hall of Skipping Fame” and that she wanted more than anything to honor him for his pioneering skipping contribution on the website in whatever way she possibly could. They’ve been developing a delightful virtual friendship ever since.

Although THE Skipper does not currently have a regular skipping practice, his passion for skipping as a form of locomotion still knows no bounds.  He officially went into skipping retirement in 1990 after local officials refused to give him the permits he needed to keep his skipping business alive. (Clients paid him to skip around town carrying a billboard as Bill is demonstrating in the picture above that was taken in Atlantic City.)

All of the buzz that the Carolina Camera video going viral has created has Bill contemplating a return to the skipping stage after all of these years, which we sincerely hope will eventually happen because his passion, expertise, and pioneering spirit feel like exactly what the skipping movement needs to go to a whole new level!  And our world certainly needs the positive energy that skipping represents now more than ever.

Bill was kind enough to recently answer a few questions for us about skipping, the recent interest in his video, and what he’s currently devoting his abundance of creative energy to. so without any further ado, may we introduce THE Skipper….

Do you still believe that skipping should be a more mainstream activity?  If so, why?

I have always believed that skipping is a “better way to move across the earth by foot.” Better than running because it’s less harmful. Better than walking because it’s faster. When done properly it is a controlled form of locomotion that can certainly be incorporated into everyday life.

Whether it will become more mainstream or not may in part depend on what you and  I do in the future.

How did it feel to have your video from the 1980s go viral like it did recently?

It came as a complete surprise to me and I only found out about it after I started hearing from friends. What doesn’t surprise me is the interest in it.  I was always the object of intense curiosity and interest from the day in 1982 when I went public with it.  It brought back a lot of memories from Charlotte, NC where I ended up after leaving Newport.  It reminded me of some of the fascinating things which  happened to me as a result of being the first adult human being to take a childhood form of movement and incorporate it into daily life.  It is an incredible story if I do say so myself and I may have to get serious now about sharing it with the world.

What advice would you offer to someone who would like to start skipping but is hesitant to do so because it is such an usual form of locomotion?

There are two parts to skipping and both are difficult. The physical part requires that the technique be learned or injury can result – just like what happened to me when I skipped in the Newport marathon and ended up crawling back to the starting line on a cold, raw November day, a mile out on Ocean Drive, wearing white athletic socks which had turned red with blood.

The other part involves my famous statement, “Skipping isn’t a contact sport. It’s an “eye-contact” sport.” If you are not ready to draw attention to yourself, sometimes not necessarily the positive type, then you may need to re-think your intentions.  Skipping in public is not for the self-conscious.

What lucky projects are lucky enough to have your passionate personality working on them these days?

Right now I’m doing my small part to help make sure the Flipper-in-Chief does not unseat the President through the Mitt Romney Flip Flops website. I commissioned a fabulously talented cartoonist, Josh McGill, to create the illustrations which I  conceived for T-Shirts I like to call the “uniforms for the soldiers in Obama’s army.” Romney and his cohorts would be an 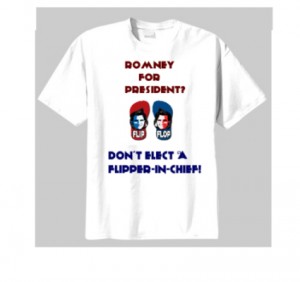 absolute disaster for the country just in terms of what he will put on the Supreme Court. If he’s elected I’m skipping town.

My real job is to provide legal document preparation for people with family law cases like divorce, custody, legal guardianship, adoption, etc., at a price which is affordable. I’ve been in the business for almost 10 years working for 3 different companies, 2 of which I owned.  www.lowcostlegal.org

It’s a much needed service for many people who simply cannot afford an attorney. We do a complete divorce or custody case for $389 which most people find almost too good to be true. But we have saved  a lot of people from having to endure dreadful marital conditions and have gotten custody and visitation for parents whose kids have been kept from them.  Maybe someday we might even make some money doing it!