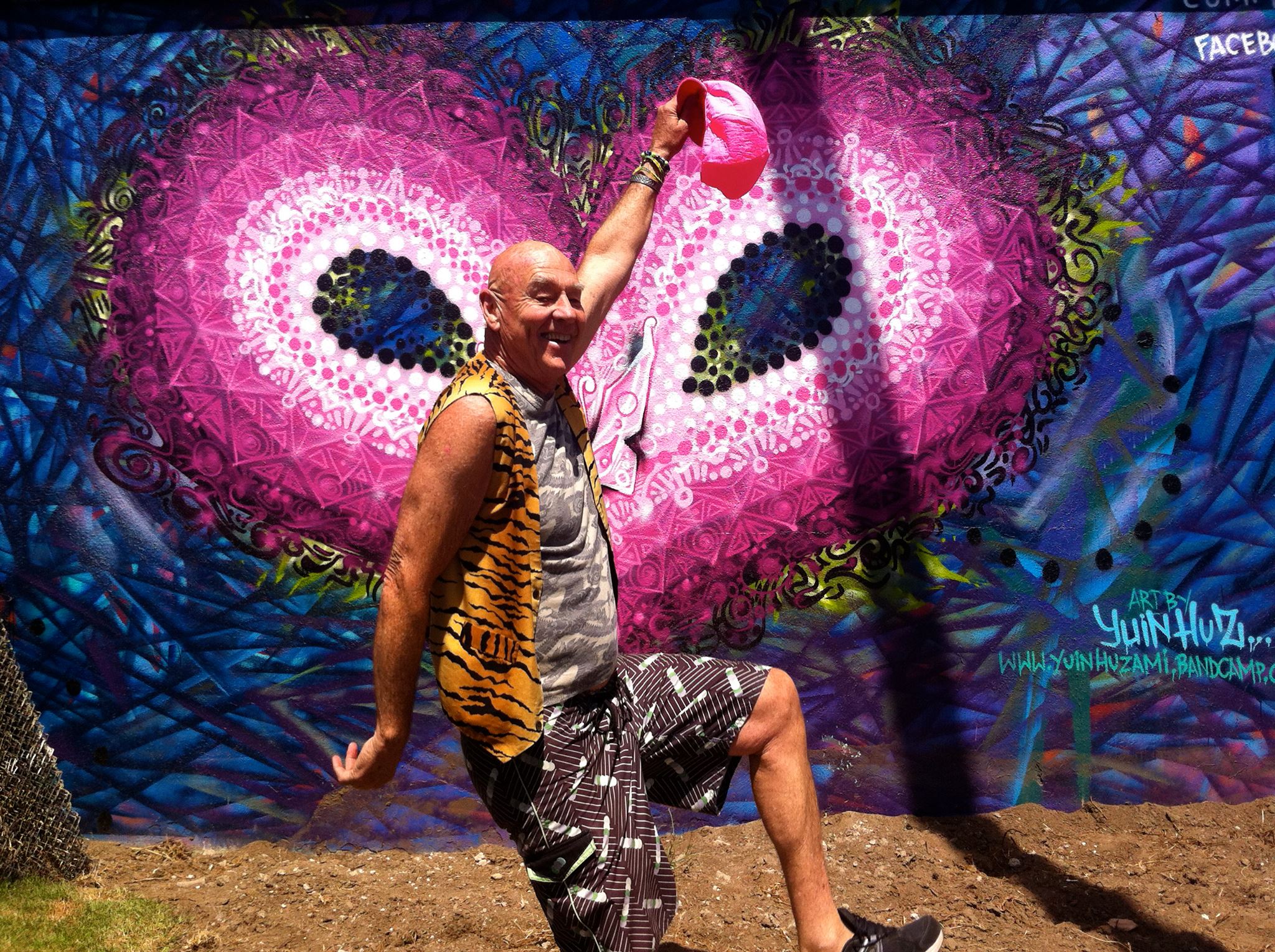 “Just to get over being seen as “silly,” which I see as a huge taboo in contemporary American, is a major step in becoming more authentic and true to oneself” -James Wanless, Ph.D.

“Instead of “synchronicity,” perhaps we should call it “skip chronicity.”-James Wanless, Ph.D.

I first met Kim “Skipper” Corbin at the International New Age Trade Show (INATS) in Denver in late June.  I was there as MC of the Award Ceremonies, and as a seminar presenter on “Synergy At Work,” and to represent my many books and card decks.

As I went to get “glittered” on my hair-free head at the Kuumba Made booth, I noticed this attractive woman – Kim, of course – at New World Library‘s stand and stopped to say “hi.”  I can’t remember much else that happened, as I was probably entranced by her compelling aura, but somehow we did talk about her “skipping project.”  I was hooked.

As a physical person, ex-runner, former quarterback, now a body surfer, avid walker and bouncer on exercise balls, my interest in skipping didn’t take much kindling.  In fact, I’ve always found skipping to be the quickest way to elevate your spirit with joy and laughter.  And just a few weeks earlier, I discovered the secret to the Stones’ Mick Jagger’s extraordinary and sustaining energy – he skips and skips on stage during his live performances. Aha!

I signed on for the 21-Day Skipping Experiment without any explanation.  It just sounded great and I love “experiments.”   I am a big fan of implementing change in one’s life by some kind of continuous “practice.”  This is what I teach in all my self-transformation courses – taking a lot of baby steps toward achieving a goal; and why not take skipping steps, not only for their physical effects but as a symbolic and ritualistic path, which in my case, is about sustaining, renewing and energizing my life at 7o years-young.

Everyday that I skip, I dedicate the session to rejuvenate body and soul, heart and mind. My cells love it, my heart pulses, my brain awakens… I am reborn.  Skipping is a way of ever-greening myself as that is my life purpose – to be a modern-day “Green Man” who lives as the eternal spring.

Beginning on this “skipping path of life,” I realized that my apartment is certainly not large enough, so it had to be done outside, and that’s one of the most valuable parts of this “exercise,” – you get looked at in a funny way by others.  Just to get over being seen as “silly,” which I see as a huge taboo in contemporary American, is a major step in becoming more authentic and true to oneself, uncaring of approval and judgment by onlookers.

As the creator of the modern classic, Voyager Tarot, I am adamant that the sustainable way of life is for activists and not “voyeurs.”  Activists, by their very nature, are revolutionaries – busting the conventional sheep-like ways of the masses, undeterred by ridicule.  By doing this “wonderfully silly” skipping – as someone commented on my Facebook page – I have become more courageous, growing a fortified backbone and core of integrity within myself. This all leads to an enhanced sense of self and self-worth.

Living in Los Angeles, I always drive by marvelous wall paintings, but now, I began skipping to their motifs, and I naturally began skipping in different ways.

I will never ever forget finding palm fronds in a garbage bin in front of a spectacular wall painting of the sacred Indian Ganesh elephant, and I did a “celebratory skipping” while fanning the elephant to honor the majesty and wisdom of this most holy beast. 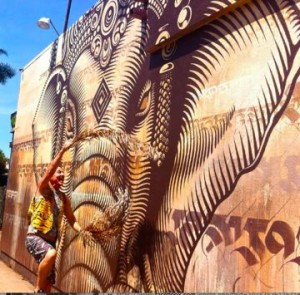 Then I found the “Love Shack,” a very cool emporium, that shouted out to me to get hip, put on my pink pimp hat and skip in front of the block-long sign. 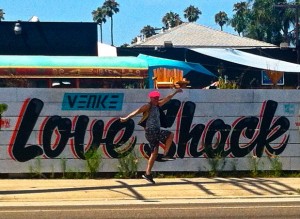 Waiting in an interminable line to get into the DMV office to renew my license, I was in front of a vast mural depicting a space station on the moon.  Why not skip to the moon, I thought, and so the next day, I went back and skipped the entire long length of the wall like a rocket ship charging to the moon to become the first “Lunanaut.”  How loony?  Indeed. 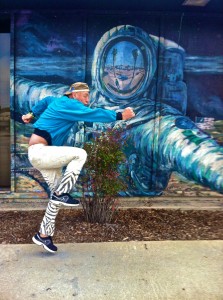 Skipping makes you a bit crazed with ebullience and is, in fact, an elixir, a veritable “fountain of youth,” which I discovered skipping to an effervescent woman on a wall whose beauty was overflowing with love. 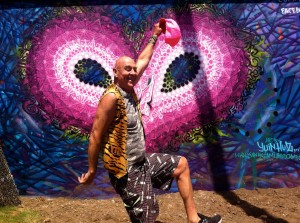 In love with skipping, I skipped over to another wall that depicted giant Redwood trees.  There was no way I could resist “Skippin’ Large and Reachin’ High” to this magnificent painted forest. It was inspiring! 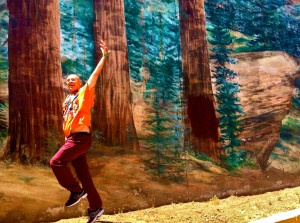 By this time, I was a skipping addict (where’s the recovery program?) and no wall painting was safe from skipping ways.

As a photographer and a bit of an exhibitionist, I suppose, I corraled my coach, Wowza, famous for her expressive fitness program called “Wowzacise,”  to photograph these “skipping activations,” as they are catalysts to total self-awakening.  With my iPhone, Wowza would click picture after picture of me skipping, hoping we would get just the one “money shot.”  The process was a real workout, skipping over and over again on the “moon,” in a tree “forest,” and in the “Hollywood Hills” looking down at the LA lights. 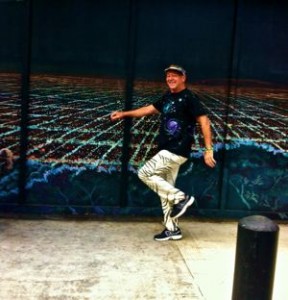 What a way to skip-over the same old social self-identity. Now, that I am full-fledged “skiptomaniac,” I found myself trying another skipping technique on a mountain trail in Tacoma, WA, where I worked after Atlanta.  Going down to a wild beach down a wildly steep trail, I began skipping but immediately this broke into a run and I careened down, almost breaking a leg, but, of course, not my camera.  Now a skipping expert, I advise you to not skip down hills!

Soon afterwards, however, I found that I was not so skip-expert, as my host in Tacoma, whose name is Skip, (it’s true), asked me if I knew how to skip backwards.  I didn’t.  Humbly, in front of where I was working at a restaurant called “The Poodle Dog,” I learned how to “skip with skip.”

Now, I am a certified barking, “skipping fool”  – the tarot card I picked for this 21 one-day program was the Fool and this particular Fool was in fact skipping!  I do believe that skipping enhances one’s personal energy field which attracts like energy, like the Fool.  Instead of “synchronicity,” perhaps we should call it “skip chronicity.” 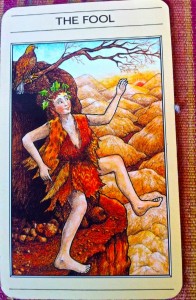 Everyone should skip!  Just like the many “laughing clubs” around the world, we need “skipping pods,” just as a bunch of wise, witty and wild dolphins who swim skip fully through life playfully and passionately. Bring back skipping, but where did it ever go? And why?  Probably because it’s too much fun and  it’s “just so silly.”

James Wanless, PH.D was a distinguished university professor in the Middle East when he experienced a life-threatening disease which led to a spiritual transformation.  He relinquished his academic career and began to share his new found wisdom and inspiration

James is a futurist and pioneer of new thinking and recognized for weaving timeless wisdom into modern life with intuitive tools and symbolic systems.  With his magical blend of personal charisma, humor and pragmatic enthusiasm, he is thought of as a “corporate shaman” and an internationally known authority on intuition.

He lectures, trains and consults throughout the world.  He is the noted creator of the best-selling modern classic, Voyager Tarot  and also the author of numerous books and card decks including Inutition @ Work, Way of the Great Oracle, Strategic Intuition for the 21st Century, New Age Tarot, and Wheel of Tarot.

2 thoughts on “My Journey to Skiptomania by James Wanless Ph.D.”