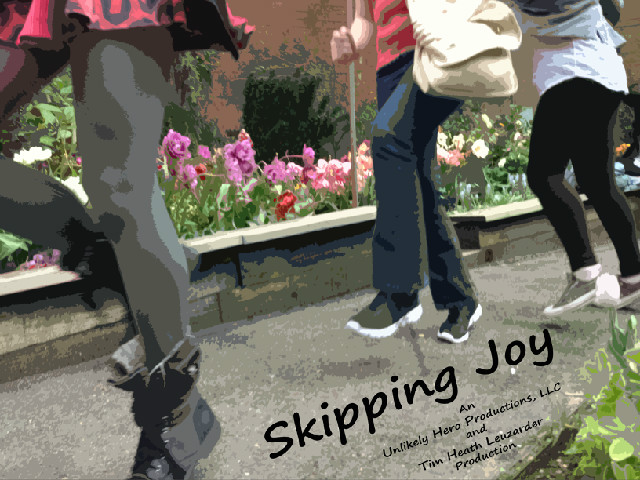 We are wildly excited about the documentary film project that New York based actor, writer, director, and the latest inductee into the iSkip hall of fame Tim Health Leuzarder is working on! It’s called Skipping Joy and will takes a candid and humorous look into, you guessed it, SKIPPING!

We hope that you will enjoy the trailer, and the short interview we recently did with Tim where he tells all about his vision for the film, which is expected to be completed sometime in 2014.

Tell us about the skipping documentary you are working on!

The documentary is called Skipping Joy.  It’s an inquiry into the act of skipping and why we start and stop doing it.  Skipping is a cross cultural behavior and as such-may be an innate human practice.  It also appears that the act of skipping brings an automatic sense of joy to the skipper—no matter the age.  By virtue of that, this documentary has been a lot of fun to shoot so far.  We shot a skipping flash mob in the city and we’re shooting some other fun skip related events as well. 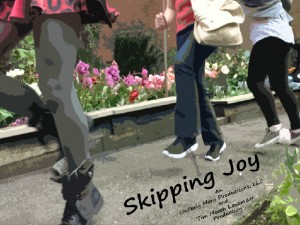 What inspired you to start working on the documentary?

The inspiration for this film originated with my 10 year old son, Lucas.  He skips when he’s happy and has been doing that since he was around 4 years old.  Neither his mother or I taught him how to skip…skipping just started happening.  When I see him skip, it is really heart warming.  About 6 months ago, we were walking down the street in NYC and we started a conversation about the possibility of getting a dog.  Lucas skipped all the way to the corner and had no conscious recollection of doing it.  I thought that was really fascinating.  Skipping just happened out of joy and he was so in the moment, he had no idea he was doing it.

Needless to say, I don’t want him to stop having moments like that.  I do realize that societal norms will eventually win.  Perhaps this documentary  can do a little something to shift those norms.

What has been the most surprising thing you’ve discovered about skipping since you started working on it?

I’m most surprised by the idea that this could be an innate practice.  I’ve talked to many people including a renowned Cognitive Neuroscientist that believe that the cross-cultural aspect of this alone means that it was probably born out of some sort of evolutionary necessity.

I’m also surprised at how quickly people say they are experiencing happiness and joy when they skip.  It’s incredible how quickly this simple act shifts people’s state.

Do you skip? If so where and how frequently?

I’ve skipped with my son on occasion over the years.  I’ve skipped a lot since I’ve started doing this film.  Most adults are not going to skip unless I am willing to.  It’s funny, though.  I am one of the only people I know of that felt like he couldn’t skip as a child.  I remember being around the age of 7 and having my babysitter, my sister and my dad trying to teach me how to do it.  Eventually, I learned and stopped.  I still feel a little self conscious skipping at times.

What advice would you offer to someone who is intrigued by skipping but is too self-conscious to give it a try?

If you are intrigued with the idea of skipping, then get out and do it!  It’s great exercise and once you get past the feeling of being self-conscious, joy and happiness are instantly accessible.  Start in a safe, non-judgmental environment and get at it.  Also, if there is a child in your life, get out with them.  A child will make skipping cool!

How can people find out more about the documentary/find out what it is released, etc?

To find out more about the documentary, people can go to the Skipping Joy website or www.unlikelyheroproductions.com or they can follow us on Facebook by liking the ‘Skipping Joy’ page.  We set up that page up so that people can upload short and fun skipping videos with the possibility of having their video included in the film.