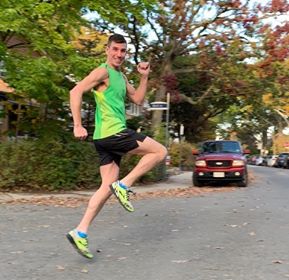 Hall of Fame
May 17, 2020May 17, 2020 kimskips 3812 Views 0 Comment
Canadian runner and juggling expert Michal Kapral is our latest inductee into Skipping Hall of Fame for breaking the Guinness World Record for skipping the fastest half marathon in 2 hr 12 min 46 sec at the Scotiabank Toronto Marathon in Toronto, Ontario, Canada, on October 20, 2019.

We recently had the opportunity to talk with Michal about his skipping record and his passion for joggling, which is jogging and juggling at the same time, and hope you’ll enjoy the interview.

You have set several Guinness World Records for joggling. What inspired you to set your sights on your goal of skipping a half marathon? 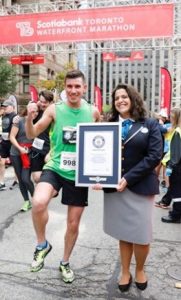 I had the great fortune of getting invited for a trip of a lifetime to Maldives, with my wife and two daughters, to set a couple of joggling world records to promote running and sports tourism there. The Toronto Waterfront Marathon was taking place a week after we got back and I wanted to go for another world record there since they have a Guinness World Record adjudicator on site to verify the records on the spot.

I scrolled through the different records available for the half-marathon and the skipping record immediately caught my eye. I didn’t want to do a costume record and was looking for something that involved some kind of separate skill, similar to joggling.

I had never done any extended skipping training. My skipping experience was limited to doing the triple jump in high school, and doing skipping drills as track practice as part of the University of Toronto Masters Track Club. I tried skipping back and forth across the living room, dining room and kitchen in our small house, and felt an instant sense of freedom and joy!

Right after that, I signed up for the race to go after the skipping half-marathon Guinness World Record, which was listed as 2 hours 27 minutes by world record legend Ashrita Furman. I had no idea what I was getting myself into, but it was going to be for a good cause as I raising money for Giant Steps, a program for kids with autism.

Was there a certain point in the race where things went from you experiencing the joy and newness of skipping to “embracing the suck” which is a phrase from you I read in another article recently?

About 9 miles into the race, I developed some major blisters on the bottoms of my feet, and general exhaustion set in. I was really struggling! My pace slowed from 6 minutes per kilometer to 7 minutes. Hundreds of non-skipping runners were blowing past me like I was standing still. I could feel the record slipping away. Even through all of this, though, I still felt the joy of skipping. I smiled and laughed through the pain, and fed off the energy of the spectators who were smiling and laughing at the sight of me. So while I embraced the suck, I also continued to embrace the joy of skipping as a way to counteract the suffering. I also thought about Terry Fox, who has a similar kind of skipping gait on his Marathon of Hope running across Canada on a prosthetic leg with cancer ravaging his body. I thought if Terry Fox can do it for days and days, I should at least be able to skip my way to the end of this half-marathon. I went through a lot of emotions and introspection in those last few miles of the race.

Tell us more about the reaction you got from the crowd.

I had “Guinness World Records Official Attempt” signs on the front and back of my shirt, so spectators were yelling “Go get that record!” and “You’ve got this!” A lot of people asked me if I was going to be skipping the whole thing, and when I said yes, they would yell “Whoa!” Some people just broke into huge belly laughs, which in turn made me laugh. The smiles and laughter were infectious and it went on and on for the entire half-marathon! I did a lot of high-fiving the crowd as well, which was a nice change from joggling, where I can’t high-five because my hands are busy juggling. Even when things got really tough near the end of the race, the crowd kept me smiling and laughing.

Do you think you will start skipping more in regular life after your experience?

My wife has been laughing at me as I now regularly skip around the house. I’ll definitely be doing more skipping as a warmup for running.

Have you tried skipping and juggling at the same time? And what would that be called? Skippling? LOL.

Yes, I have! It’s challenging but doable. I guess it could be called skippling, skuggling or skipuggling.

Thank you so much for taking the time to answer our questions, Michal!

Here’s a short video clip from Michal’s big skip at the Scotiabank Toronto Marathon in Toronto, Ontario, Canada, on October 20, 2019.