This website started in 1999 and at several different points over the years, we have heard speak of an extremely passionate skipper who got media coverage in the 80s, but despite diligent research, have never able to find an article or mention about him, etc.   We were always surprised that we didn’t hear from him when the skipping project was getting a lot of publicity, because it seemed like someone in his life would have told him about it!

Imagine our surprise when we were sent this video that at long last gave us a glimpse into the 80s skipper in action:

Thanks to some helpful hints via iskip readers, we were able to finally connect with Bill and are thrilled to have him be a part of the Skipping Hall of Fame!

Although he does not currently have a regular skipping practice, his passion for skipping as a form of locomotion still knows no bounds.  He officially went into skipping retirement in 1990 after local officials refused to give him the permits he needed to keep his skipping business alive. (Clients paid him to skip around town carrying a billboard as Bill is demonstrating in the picture above that was taken in Atlantic City.)

All of the buzz that the Carolina Camera video going viral has created has Bill contemplating a return to the skipping stage after all of these years, which we sincerely hope will happen because the skipping movement would only benefit from his passion and expertise!

Bill was kind enough to recently answer a few questions for us about skipping and the recent interest in his video…. so without any further ado, may we introduce THE Skipper….

Do you still believe that skipping should be a more mainstream activity?  If so, why?

I have always believed that skipping is a “better way to move across the earth by foot.” Better than running because it’s less harmful. Better than walking because it’s faster. When done properly it is a controlled form of locomotion that can certainly be incorporated into everyday life. 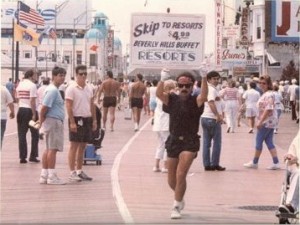 Whether it will become more mainstream or not may in part depend on what you and  I do in the future.

How did it feel to have your video from the 1980s go viral like it did recently?

It came as a complete surprise to me and I only found out about it after I started hearing from friends. What doesn’t surprise me is the interest in it.  I was always the object of intense curiosity and interest from the day in 1982 when I went public with it.  It brought back a lot of memories from Charlotte, NC where I ended up after leaving Newport.  It reminded me of some of the fascinating things which  happened to me as a result of being the first adult human being to take a childhood form of movement and incorporate it into daily life.  It is an incredible story if I do say so myself and I may have to get serious now about sharing it with the world.

What advice would you offer to someone who would like to start skipping but is hesitant to do so because it is such an usual form of locomotion?

There are two parts to skipping and both are difficult. The physical part requires that the technique be learned or injury can result – just like what happened to me when I skipped in the Newport marathon and ended up crawling back to the starting line on a cold, raw November day, a mile out on Ocean Drive, wearing white athletic socks which had turned red with blood.

The other part involves my famous statement, “Skipping isn’t a contact sport. It’s an “eye-contact” sport.” If you are not ready to draw attention to yourself, sometimes not necessarily the positive type, then you may need to re-think your intentions.  Skipping in public is not for the self-conscious.