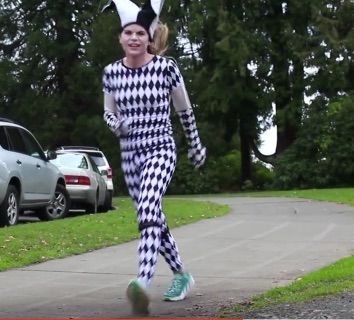 Oh how we love when a new skipper leaps onto the scene with a fun story to share!  This certainly was the case when Seattle’s Skipping Jestress reached out to share her story!   She skips several times a week, between four and eight miles at a time, while wearing a jester outfit, and was recently interviewed by the Seattle media about her skipping mission.

We also had the opportunity to talk to this super skipper about her amazing skipping life,

What inspired you to start skipping?

As I stepped out the door on my first attempt at performing as a jester, as a street performer, it occurred to me that a jester should skip, or at least I, as a jester, should skip. So I went on about a mile or so skip through the local Saturday market, in Boise Idaho.

The next day I could not walk, or could barely walk. It took several days to recover.

Over the next couple of years I switched over my five mile run/jog to a five mile skip. I also realized that skipping, even without the costume was something of a spectacle, at least in Boise.

I love that being a Jestress inspired you to skip! What was the inspiration behind getting into street performing?

I was traveling with a carnival and would recite classical poetry from memory to people for fun. That evolved to me reciting classical poetry to people on the street doing a shtick where I would ask an individual to name a poet and would recite a poem by that poet.. I reached a point where I was going to have to put that shtick aside for awhile and developed the Jester routine because I love street performance and classical styles of performance art.

Jesters are actually one of the oldest forms of street performance.

Do you do other things besides skipping as the Jestress?

I do, I have various antics and skipping also incorporates a lot of quick personal interactions, provided I do not have to keep all my attention focused on staying safe while skipping. 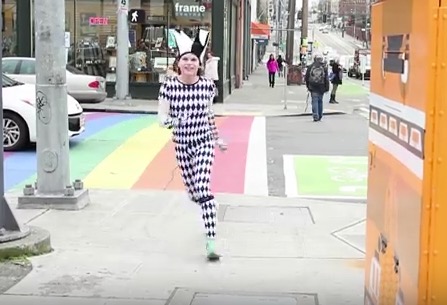 I’d love to hear an example or two of your favorite skipping interactions.
Clowns are often out there to make people smile, most I would hope, and I do the same. So I use various miming and clowning techniques to have positive relationships with people as I skip by.
Sometime I come across individuals having a hard time crossing the street and I will jump in and stop traffic to assist, but only where traffic should be stopping for them anyway.

How often do you skip and for how long at a time generally?
I try to get out three times a week from four to eight miles. I usually skip about five miles.
Impressive. As more of a skipping interval kind of gal, I am curious how your shoes hold up at those distances?
Good question. I where Hokas. I should change them at about six weeks but I often wear them about three months before I rotate them out. I think the old sketcher shape ups are better but not as durable.
I have to cut the back of my shoes though to keep them from bothering my Achilles tendon and wear jumper knee straps, which helps a lot as well.

What do you love most about skipping?
It’s like flying, especially on a bit of a slope, it’s also like having a secret silly super power.

Do you ever skip with others? Or do you prefer to skip alone?

It would be dandy to have someone to skip with but I don’t know anyone.  I am going to attempt to start a skipping group at some point,  for those who want to skip but don’t necessarily want to look like a fool. 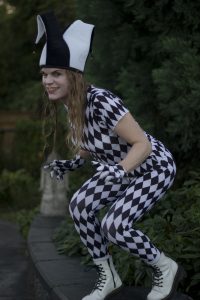 Where is your favorite place to skip?

I like skipping about capitol hill Seattle and really enjoy skipping around Volunteer park.

There are also some spots around the city where the sidewalk is wide and in good condition, the foot traffic is low and it is on just the right downward slope.
When did you move from Boise to Seattle and do you notice any difference in how skipping is received between the two places?
Two years this month and in Boise people would go nuts and often make really rude comments and follow me. there is much less of that in Seattle. People in Seattle are too cool to really get too worked up by much!
How long have you been skipping?
Four or five years though the street performance as really stepped up in the last year and a half.
What would you say to someone who is intrigued by skipping but doesn’t do it because they are afraid of looking like a fool?
The Tao Te Ching says that true wisdom is childlike. Also, most people appreciate skipping and the people who make fun of those that do their own thing are best left to themselves.

Do you think skipping could change the world and if so how?
Yes, skipping and a sense of joy and silliness are very interrelated and if skipping could become a mainstream activity then I think it would promote joy, play and the silly sense of not taking things too seriously.
Share This Post: